As a part of RCA at Indianapolis, you will be joining the forefront of the battle against substance abuse in Indiana and help Recovery Centers of America bring high-quality, affordable addiction treatment to those in need of help. The opportunity to make a difference in your community and save lives from the disease of addiction is what makes a career at RCA far more than just a job. At RCA, you will join a group of truly dedicated and compassionate professionals to make a real difference in the life of others.

RCA chose the location for RCA at Indianapolis based not just on the local need but also because of its incredible location, just 20 minutes outside of downtown Indianapolis and Eagle Creek Park. We believe that our facility’s access to a sprawling metropolitan area and a gorgeous outdoor nature reserve make RCA at Indianapolis a fantastic place to work.

A DAY IN THE LIFE 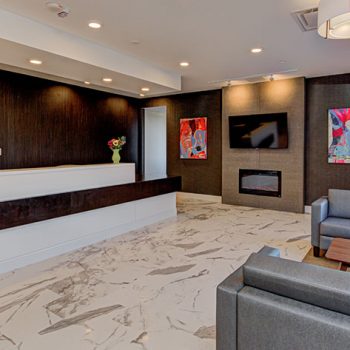 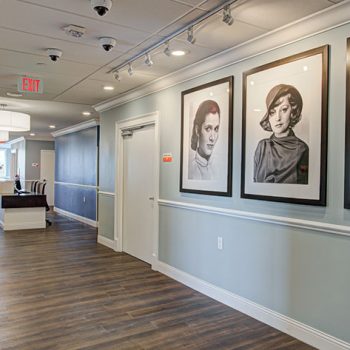 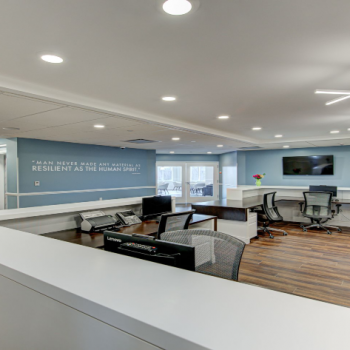 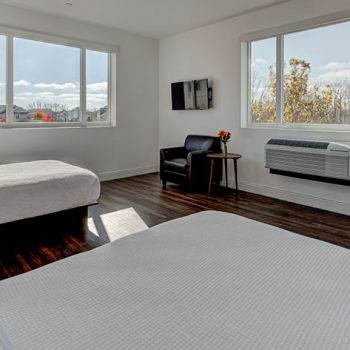 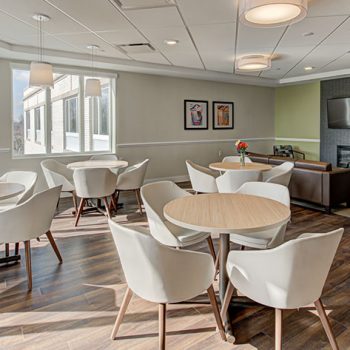 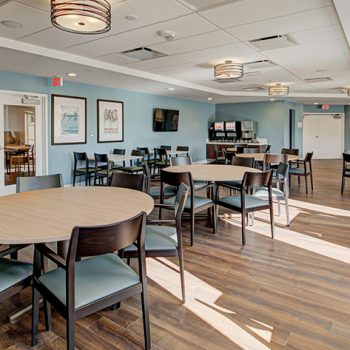 One of the keys to success for RCA at Indianapolis is great management. Its management team has a proven track record of high-quality addiction treatment. At RCA, we believe that strong leadership isn’t just great for the company, it’s also an opportunity to learn from the best and grow as a professional. 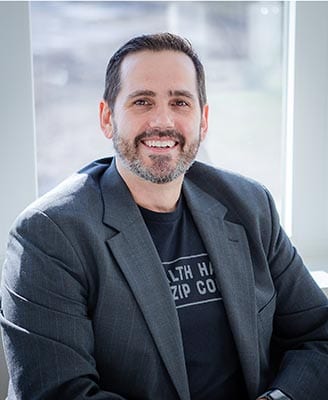 William Cooke, MD, FAAFP, FASAM, AAHIVS, is a fellow of the American Academy of Family Medicine and the American Society of Addiction Medicine, specializing in family medicine, addiction medicine, and HIV medicine. His work has been covered by CBS, NBC, PBS, the BBC, USA Today, the New York Times, NPR, and others. In 2019, he was named National Physician of the Year by the American Academy of Family Physicians and joined the ranks of two US surgeons general and a former secretary of the US Department of Health and Human Services by receiving the Ryan White Distinguished Leadership Award. He was also the first physician in the nation to be awarded the Pillar of Excellence by Addiction Policy Forum. 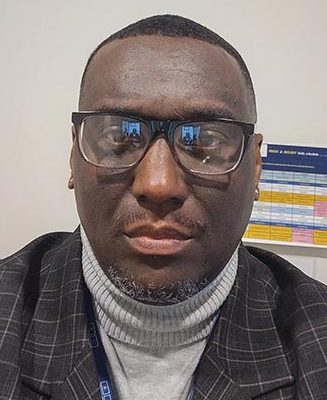 Darius Brannon, MSEd, LCAC, LICDC (OH), joined Recovery Centers of America (RCA) in December of 2021 as a Clinical Supervisor and promoted to his current position as Clinical Director in April 2022. Prior to joining RCA, he worked at New Vista Outpatient Recovery Center (Opioid Treatment Center) as Program (2021), Program Manager of an Inpatient Detox Unit at an Acute Behavioral Health Hospital (Valle Vista) (2020-2021).

Darius has worked in the Addictions field for approximately eleven years in several different capacities including the Forensic Treatment Services Clinical Director of the Recovery Works Program for the State of Indiana Division of Mental Health and Addiction (DMHA), Addictions Therapist at Edgewater Health (Gary, IN), Addictions Specialist at Regional Mental Health Center (East Chicago, IN). He also has 14 years’ experience in law enforcement as a Gary and Cincinnati Police Officer. 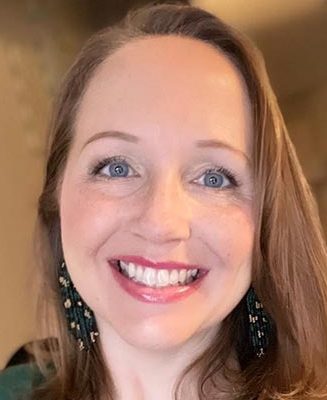 Kelsi Linville, MA joined Recovery Centers of America at Indianapolis as the Director of Admissions in January 2022. She brings over a decade of experience in the behavioral health field, including work with children, families, and adults with serious mental illness and co-occurring substance use disorders. While much of that time was spent in direct service, she also worked in program development as the Bureau Chief of Adults with Mental Illness and Co-occurring Disorders at the Indiana Family and Social Services Administration’s Division of Mental Health and Addiction. Additionally, she served as the state’s Disaster Behavioral Health Coordinator and Director of Crisis Services, during which time she was instrumental in the launch of the Be Well Crisis Helpline, a statewide phoneline providing free, confidential 24/7 crisis counseling to anyone in the state of Indiana.

Kelsi is motivated by a wholehearted belief in the inherent worth and dignity of all people and feels it’s a privilege to play a role in helping people discover, embrace, and live out their worth. Much of her career has been focused on ensuring individuals in need have timely access to appropriate care and she is grateful to continue that work at Recovery Centers of America at Indianapolis. 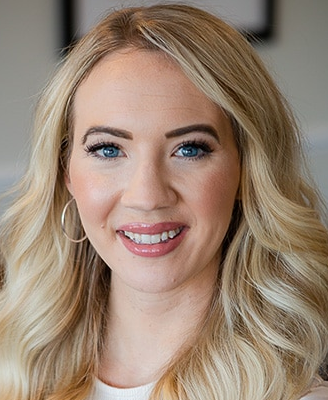 Amanda Hildebrandt, BS, CADAC II joined RCA in November of 2020. Amanda received her Bachelor’s of Science in Psychology from Indiana University and used that to develop her career in child and family services. After seeing the impact that substance use disorders had on family systems she transitioned into the correctional setting as a substance abuse counselor for the Indiana Women’s Prison. There she moved from counselor to director and ran the Recovery While Incarcerated program for all of the female offenders that suffered from substance use disorders including the pregnant and parenting mothers.

Amanda believes in the biopsychosocial approach to treatment. She is currently obtaining her Masters in Marriage and Family Therapy. She is part of the Corporate Training Team and brings an educated and passionate element to training all of the new employees at RCA Indianapolis. She works alongside the other leadership and specialty areas in the building to make sure all staff are supported in their specific training needs so the patients have 5-star treatment in every realm of services while at RCA. Amanda was born and raised in Indiana and is proud to be part of the mission to bring quality substance abuse treatment to those in her home state.

Click on any department to learn more about their function at Recovery Centers of America – Indianapolis.

The Admissions Department is the first point of contact for patients entering RCA’s facilities. Empathy and professionalism are key so new patients, who are just starting their recovery journey, feel comforted and reassured. Admissions works directly with the Mission Center at the King of Prussia office to obtain intake information for pre-screened, pre-authorized patients scheduled for admission in order to complete the admissions process at their respective facilities. Admissions professionals guide newly arrived patients through the full gamut of physical screening, performing Bio-Psycho-Social, Medical, & Psychiatric assessments, and entering patient health data and history into our Electronic Health Record System (Avatar) as necessary.

The Case Management Department is responsible for patient aftercare. Case Managers work directly with patients under their care, as well as alongside the clinical department. They also put together a discharge plan detailing where the patient will go after they finish their inpatient stay at RCA, follow up services, and treatments the patient will need.

The Clinical Department is responsible for implementing new programs and treatments, as well as also making sure all existing treatments are consistently meeting patient needs. They gather patient feedback and report relevant data up the chain. Clinical is also in charge of distributing printed educational materials such as workbooks, handouts, and patient assessments. Clinical consists of accredited experts in the field of addiction treatment who are expected to offer guidance and expertise to patients as well as the staff at their respective facilities. The Clinical Department also includes therapists who manage a wide profile of patient cases offering group, individual, and family counseling.

The Housekeeping Department is responsible for maintaining the cleanliness of RCA facilities. They perform day to day activities to ensure that all patient rooms and meeting spaces are maintained to RCA’s high standards.

The Quality Assurance Department ensures proper documentation occurs as required by law, as well as for internal company usage. They are also responsible for processing and responding to all incident reports originating at their home site. This department serves as Corporate’s independent oversight team, ensuring all operations comply with applicable laws, regulations, and rules such as State Regulations, Accreditors HIPAA, 42 CFR Part 2 and plays an essential role in preserving RCA’s integrity and reputation.

RCA’s Recovery Support Specialists are a very important part of the Clinical Department. Often the most common point of contact for patients, they maintain order at their respective facilities, guide patients to their scheduled groups and meetings, and ensure an efficient flow of day to day activities. They also offer one-on-one support to patients when appropriate. Recovery Support Specialists are compassionate and empathetic, they often form close bonds with RCA patients.

The Transportation Department provides patient transportation to and from RCA facilities, as well as takes patients on scheduled field trips and doctor’s appointments as necessary.

I honestly love working at RCA. The management work just as hard if not harder than they expect their staff to. The staff are all eager to help each other succeed and grow. There is a ton of room for advancement through the company and I honestly would love to retire at RCA.”

Top notch upper management team had taken over. This has led to positive change in policy and procedures which benefits both staff and patients.”

Having worked in similar position with another agency I was immediately struck by the resources built in to the program to support our patients. Yes the facility itself is outstanding, but the dedication and compassion in the staff is incredible. I have seen staff go the extra mile for our patients because they genuinely care. I am seeing positive progress by leadership to address kinks and streamline processes to improve the day to day functioning and communication. I feel supported by leadership and have seen good teamwork between staff members.”